My traditional New Year’s Dinner: Black-eyed peas, sauteed greens with corn, oven fried chicken. Not shown: cornbread – but it’s a must have.

This past decade has been head spinning.

Here’s a trip down memory lane of a few events and advances I remember most from the decade of the 10’s:

Of course there has been so much more of greater significance that has happened, but just riffing off the top of my head, these are the things that came immediately to mind.

It’s been a helluva a ride and we must lean in, press forward and bid this decade ado.

But you know you can’t enter the new year and brand new decade without partaking in the most essential and hallowed new year’s tradition – eating your lucky black-eyed peas.

The folklore of eating black-eyed peas dates back to 500 A.D.  Steeped in the ritual of the eating the little black-eyed legume is the promise of prosperity. And that sentiment and belief has remained throughout the ages.

I have opined about the history of this sacred pea of promise and over the years,  I have posted three variations of preparing them with this one intention – that you and yours have a beautiful and prosperous new year. Below you will find these posts. Just click on the bolded text and that will take you to the recipe.

Cali-fied Caviar is a new spin on Texas Caviar

Move Over Texas Caviar, time to get “Cali-fied”– this post features a California spin on Texas caviar which was created by Helen Corbitt for her guests at a New Year’s Eve event in Houston, Texas. It is served cold and can be a side salad or appetizer. 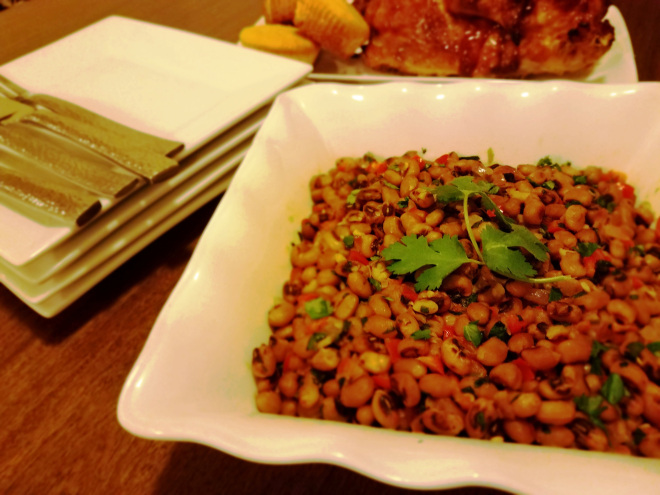 Your lucky pot of peas 2.0 Hacked – this post outlines a black-eyed pea hack that is easy and quick to make. It is  served warm and has a delicious and unexpected delicate flavor.

Get your lucky pot of peas simmering for the New Year – this post is all about that traditional pot of peas. But it gets a little help from summer savory, better known as the “bean” herb.

My hope for you

It’s going to be a bright and gleaming 2020 decade. Here’s hoping the new year brings you:

Happy New Year my foodie friends.  May you cook fearlessly and eat well!