Hot water cornbread may be a classic, rustic, southern accoutrement.  But to me its so much more.

Hot water cornbread embodies transformation.  The gathering of simple, ubiquitous ingredients can be changed or transformed into something satisfying by just investing a little care and time in the mixing process.

A life and legacy of service

Yeah, I went a little deep here, but for good reason. You see hot water cornbread was an absolute favorite of my mentor Brenda Marsh-Mitchell. (Post alert: a sassy hot water corn bread recipe is featured.) In fact when she recommended me to produce and manage the Taste of Soul Cookbook project with Los Angeles Sentinel Newspaper owner Danny Bakewell, Sr., she intended to include a recipe of the tasty, pan fried cake she loved so much. But when space became an issue, she decided not to include it. Instead she insisted I include one of my recipes in the cookbook.  That was so gracious and giving of her.

This is the spirit that was embodied in her character and defined her life and . When Brenda passed away on August 3, 2014, Los Angeles lost one of its most beloved angels.

The wind beneath her wings

For 45 years, “Brenda was the driving force and motivation behind many of the community’s most treasured and sacred events and institutions,” the Los Angeles Sentinel Newspaper so rightly stated. She impacted the lives of countless mothers, children, youth, families, seniors and homeless residents by compelling everyone she encountered to invest a little care and time in the community she loved.

For thirty of those years she worked tirelessly, alongside businessman Danny Bakewell, Sr., at the Brotherhood Crusade. There, this inseparable dual lead and championed many social, economic and educational programs that to this day continue to empower and improve the quality of life for the underserved residents in Los Angeles.

It was at  the Brotherhood Crusade where she became the Founding President of Mothers In Action (MIA), a 501C(3) organization formed after the 1992 Los Angeles civil unrest. MIA focused on program services like youth mentoring, financial literacy training, summer internships, life skills training, and food distribution programs for seniors and the homeless.

During the last 15 years of her life,  she served as  the right hand and confidant to Los Angeles Sentinel Executive Publisher Danny Bakewell, Sr. There she executed Bakewell’s vision that included a myriad of social, health and political projects that often resulted from the newspaper’s coverage of issues that had a impact on the community. Elected officials, clergy, celebrities and business leaders all knew that when Brenda called, it was to enlist their assistance in an endeavor to foster harmony, equity and justice.

It was at the Los Angeles Sentinel where she implemented Bakewell’s vision of the Taste of Soul Family Festival, the largest festival and gathering of African American Businesses in the Western United States. Under her project management as founding president of the annual festival, it grew into a destination event which now attracts 350,000 attendees. 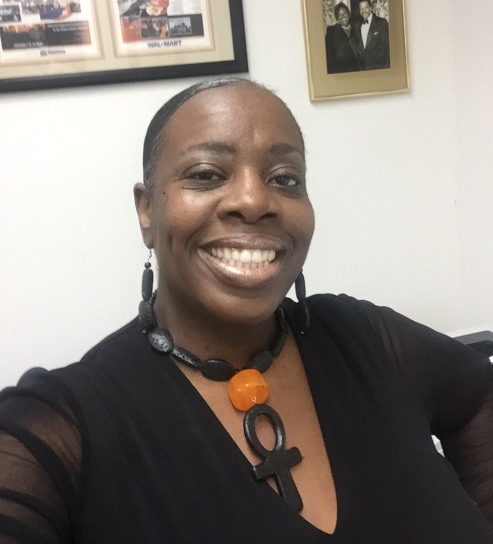 Today Tracy Mitchell continues her mother’s work as President of Mothers In Action. She is the youngest of Brenda’s three daughters, all who grew up volunteering and working with their mother since they were small children.

“Brenda’s daily prayer was let me be a blessing to someone else. This was instilled in me at a very early age,” said Tracy. “Continuing her legacy through Mothers In Action was a no brainer because I had developed that passion for giving back to those less fortunate thanks to my mother.

Loyal, dedicated and compassionate are the three attributes Tracy says define the essence of Brenda. While Brenda’s accomplishments and influence became renown from her work with the Brotherhood Crusade and the Los Angeles Sentinel Newspaper, she was driven by the many obstacles she fought to overcome from her past.

“I believe Brenda’s career path allowed her to help so many people because she had experienced so much from the challenges of being raised by a single mother, to helping raise her younger siblings when her  mother’s health started to fail, to later being placed in foster care for a period of time,” said Tracy. “She knew about the struggle and was driven to do everything she could to help those with the greatest needs.” 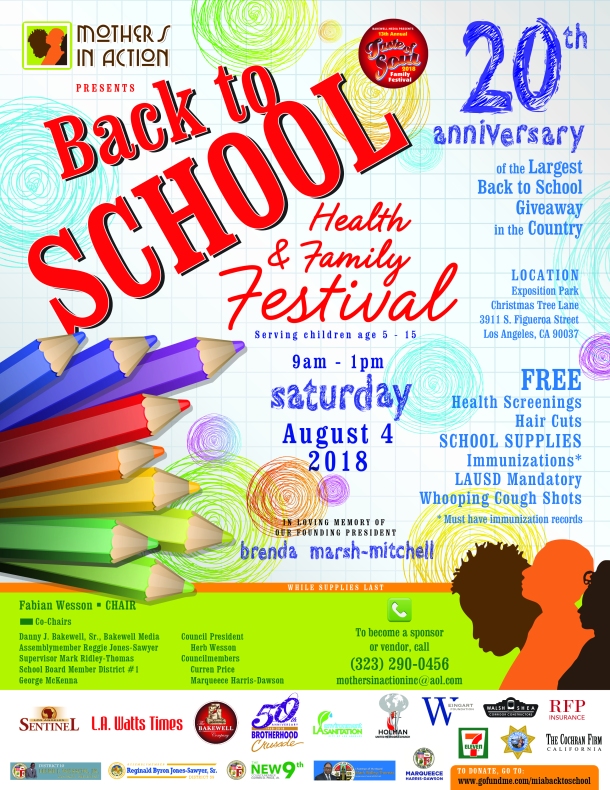 Helping children get back to school

This year Mothers in Action celebrates the 20-year anniversary of their Back to School Health & Family Festival. It takes place on Saturday, August 4, 2018 from 9:00 a.m. to 1:00 p.m., here in Los Angeles at Exposition Park.

Eye exams, immunizations, health screenings and hair cuts are just some of the free services that are offered. Tracy says this annual event was very dear to Brenda’s heart. She worked tirelessly in securing resources and sponsorships because she knew if kids couldn’t see or hear and have basic supplies, it could adversely impact their school year.

The children also get backpacks stocked with school supplies, and they take home food items like fresh fruits and vegetables thanks to their generous sponsors. Mothers in Action will also provide the children new school uniforms and underwear during this year’s event.

“We serve about 1,500 children including the City’s homeless and foster children at the event. Brenda saw a community that didn’t have what they needed and she wanted to be a resource,” said Tracy. “And we know you just can’t serve the children, you have to serve the entire family,” said Tracy adding that the event also provides health screenings, information on job training programs for the adults, and much more.

What the village needs

Tracy says the greatest need right now is for individuals and business who are willing to invest their time and resources to help Mother’s In Action continue the work her mother started.  Brenda’s dream was to open a “Mothers House,” a place where direct services could be provided like tutoring, computer lab access, financial literacy training and a myriad of other programs and services.

“I remember when I was a young girl in school, I wrote my mother a letter and said I wanted to use all of the experience I was gaining from her and one day give back to our community.  As much as possible, I’ve tried to live my life that way. MIA is a perfect vehicle for me to do that,” Tracy said.

How you can help

If you would like to help Mothers In Action with the upcoming Back to School Health & Family Festival, you can donate by clicking here.  You can also contact the office at (323)290-0456 to find out how you or your business can support their other program initiatives.

And now for that recipe I promised you. Brenda loved hot water corn bread.

While growing up, Tracy says she remembers eating it with most meals. She says when her mother didn’t make it, she would find an individual or restaurant that would.  Tracy believes the love of hot water cornbread has its genesis in Brenda’s Arkansas roots.

As a tribute to Brenda and her graciousness, and to acknowledge the opportunity she afforded me which helped jump started my career as a food journalist, I created this hot water corn bread recipe with her in mind.

It’s classic yet light and tasty. The addition of fresh grilled corn cut from the cob along with fresh chopped thyme leaves elevates the rustic fried cake into something unexpectedly good. Kind of like Brenda used to do, always elevating something and making it unexpectedly good. For this recipe I use red pepper flakes or Chipotle Chile Pepper (sometimes both)  to make it sassy and classy, because Brenda was.

This recipe pairs well with traditional Southern cuisine and just about any meal you enjoy bread with. Slather a little honey butter on the surface and that’s good eating my foodie friends.

One thought on “A life, legacy and long overdue tribute recipe”