Imagine the sound of chicken frying in a cast iron skillet.

Or a metal whisk whipping eggs in a ceramic bowl until they are fluffy and light.

For this foodie, these sounds are music in the kitchen. For Glynis Albright, these are the sounds of sweet success. 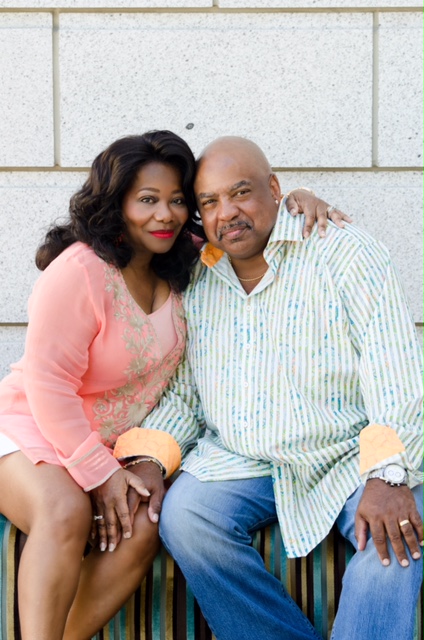 While her famed husband launches a series of contemporary jazz concert dates that will take him around the world, Glynis has just launched her new line of culinary creations that have been introduced worldwide.  Her Los Angeles kitchen was where it all began.

When the Albright’s were a young and aspiring married couple, they were on a tight budget. As necessity is the mother of invention, Glynis quickly learned how to make meager ingredients into mouth-watering masterpieces.

The Albright’s at home

“I had to be very creative during those years and make that budget stretch. I mastered three kinds of sauces: red, brown and white. Those sauces would be served over rice or pasta with a meat or protein,” recalls Glynis. “I even developed recipe mixes to make ordinary fried chicken and waffles into something my family said was very special.”

It was her recipe mixes for her succulent fried chicken and tasty waffles that got friends and family members clamoring for a seat at her dinner table.

After their move to Colorado some years later, family members and friends would often visit – including such notables like Dave Koz, Shelia E, DL Hughley, Jonathan Butler, and John Legend.   What was their number one request during their stay? Her fried chicken and waffles. They simply couldn’t imagine leaving town without having them.

“Everyone kept encouraging me to make my poultry coating and waffle mixes available to the public.  I really had to pray about it because my focus at that juncture in my life was on my other businesses,” said Glynis, which she founded after being diagnosed with and later recovered from a rare form of leukemia.

Glynis, who is a UCLA graduate and holds a PhD in natural medicine,  used her background in chemistry and biology to develop  Just Sweet Enough Gourmet Desserts, a company that uses the nutrients from fruits, vegetables, herbs and spices to create a line of desserts infused with more real flavors, juices and extracts.  She says not only did the desserts taste good, but they could also be beneficial in the healing process of those combating catastrophic illness and other health challenges.

As President and CEO of her company,  she led the research and product development that resulted in her unique menu offerings including five different mini pies, 13 cookies varieties and over 25 different pound cake flavors including, her wildly popular Sweet Potato Pound Cake. Business was going well and she had no shortage of customers, including many celebs.

But the clamor to take her poultry coating and waffle mix to market was simply too resounding.  After about two years of product and packaging development, she turned her kitchen recipe into a market ready formula.

Glynis’ Waffle and Poultry mixes are now available at Albright.Cuisine.com

Earlier this year, Glynis debuted her chicken and waffles to over 4,000 guests on the Dave Koz Mediterranean Cruise. And last month, her chicken and waffles were featured during a star-studded product launch at the famed Spaghettini Grill and Jazz Club in Southern California. Glynis says the feedback she has received has been amazing.

“What people like about my waffle mix is that they are incredibly light and crispy,” said Glynis, adding that the mix can also be used to make pancakes and crêpes. “I am blown away with the success of the products and by the love and support I’ve received.” 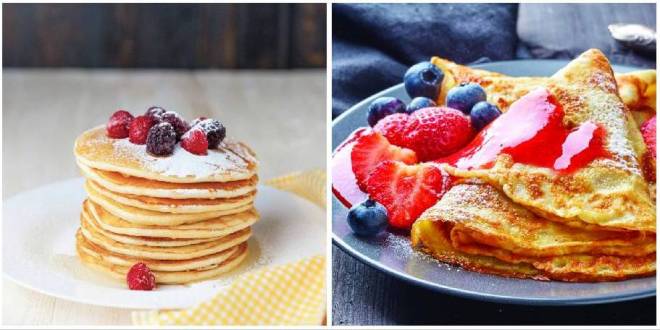 The chicken mix is unlike any other. It contains two bags: one is a buttermilk brine, and the other is a special poultry coating mix.

“In this one package, I give you everything you need to make the most delicious and flavorful fried chicken, “said Glynis.

Glynis has taken a hiatus from Just Sweet Enough Gourmet Desserts to do more research and product development. But good news – she will be back online from December 1-15 to take orders of the Sweet Potato Pound Cake that made her business so popular.

“This is just the beginning,” said Glynis as she talked about the future. “I have many ideas in development from cookware to dinnerware and kitchen accessories. And who knows, you may even see a Waffle Queen Doll.”

Gerald and Glynis met in junior high school at the age of 13. They attended Samuel Gompers Junior High School in South Central Los Angeles. They met after her family relocated to Los Angeles from New Orleans, Louisiana. The two of them became an item the following year in junior high school and they have been together ever since.  The Albright’s have been married for almost 36 years, and have been together as a couple since 1972.

In addition to Albright Cuisine and Just Sweet Enough Gourmet Desserts, Glynis is the CEO and founder of Cookie Dots, a company that makes tiny, delicious treats that are cholesterol free and low in sodium and sugar; and Making Advancements Towards Nutritional Empowerment or M.A.N.E, a 501(c)(3) nonprofit organization that takes a holistic approach to help in rebuilding  the self-esteem of women and men whose physical appearance has been impacted by their treatment of catastrophic illnesses.

Selina Albright, daughter, is also in the music industry. Her latest CD “Conversations” is Grammy-bound. Selina has her own band and tours with other major artists.  She will be one of the featured vocalists in the upcoming Dave Koz Christmas Tour.

Brandon Albright, son, is an award-winning digital filmmaker and is one of the top film editors/videographers in Colorado.  He’s the founder and owner of  Snow Desert Productions, a full service video production company. Brandon is also a semi-pro golfer. 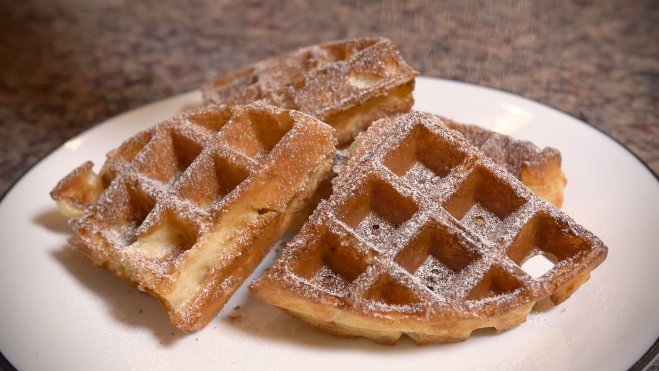 Crispy and light waffles with a burst of vanilla and cinnamon in every bite.