And in many cases they are the rock of their families, communities, churches, workplace and throughout various stations in life.

Most women live  life and do life on a cellular level, peeling back the nuances of daily living and loving, and getting down to the heart of what matters to others and then to themselves.

Living the life of a fully evolved woman is rich and murky, full of rewards and real head scratching moments.

Ok – enough of my pontification, because it’s a really short trip for me to espouse and applaud the virtues and accomplishments of women. But I pause now to do it because March is National Women’s History Month.

National Women’s History Month began in 1980 with the pen stroke of President Jimmy Carter to honor the unsung contributions women have made to the fabric of American society. This year marks the 35th anniversary of the commemoration. Each year the National Women’s History Project highlights the accomplishments of  women (past and present) who have contributed in very special ways in  “writing women back into history.”

Their contributions have been many, arduous and awe-inspiring. I would be remiss if I didn’t acknowledge the many “sheros” in my life starting with my mother and aunts to mentors, as well as a few public and historical figures. Yes, I stand on their shoulders and they have made me tall.

Yet, when we roll the wagon backward, it’s the suffragettes who blazed the trail that today’s women walk, run and sprint. The suffragettes dared to challenge the conventional status of women and fought for the right to vote and began the movement to be treated equally. They were from all walks of life from abolitionists to wives of diplomats.

Well imagine my delight when I came across The Suffragette Cookbook, complied by Laura Kleber in 1915 (part of  Project Gutenberg, now a free download).  It’s a combination of recipes and cooking tips, along with social commentary written by a number of women and men during the early days of the women’s movement. It was among the many cookbooks written during this era as a fundraising tool to support the work of the right to vote movement.

Kleber writes, “Most recipes have been practically tested by me, and those of which I have not eaten coming with such unquestionable authority, there need be no hesitancy in serving them alike to best friend as well as worst enemy—for I believe in the one case it will strengthen friendship, and in the other case it will weaken enmity.”

The recipes in the book are hearty, rustic and even a little decadent and intriguing. They include seafood, meats, poultry, breads, sauces, desserts, salads and more. They reflect the spirit of the brave and courageous women of the era who experienced countless setbacks  in their pursuit of the right to vote from filed lawsuits which were thrown out to imprisonment following protests and other civic acts deemed unlawful. Through undaunted persistence they prevailed and the 19th Amendment giving women the right to

In observance of National Women’s History Month, in deference to the suffragettes upon whose shoulders we stand, and in the spirit of the recipes reflected in the The Suffragette Cookbook, I tried my hand at the Vegetable Soup recipe listed in the book. I’ve stayed true to the simplicity of the recipe, but I used frozen peas and chunks of fresh corn to give it heartiness. The use of parsnips (if you can find them) gives it a nice twist I particularly liked.  Lastly,  I added garlic – just because. The soup is delightfully simple and delightfully satisfying.

Tell me what you eat, and I’ll tell you what you are.

If there’s one thing we can glean from the early women’s movement and its subsequent successes is this: the most essential ingredient is a lot of persistence. Stir into that a heaping cup full of determination and a generous pinch of self-belief, and you’ve got a recipe for history. Now, let’s go out and make some. Happy Women’s History Month. 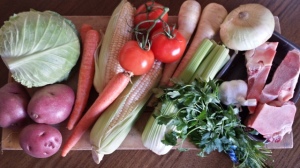 2½ pounds of beef (with soup bone – I used meaty beef bones from Kroger)
4 quarts of water
1 tablespoon sugar
Salt to suit taste (I used two teaspoons)
A few pepper corns
1 cup of each of the following diced vegetables:
Carrots
Potatoes
Celery
2 tablespoons onion cut very fine ( I used ½ cup chopped onion)
½ head cabbage cut very fine
½ can corn (or its equivalent in fresh – I used two ears cut into chunks)
½ can peas (or its equivalent fresh – I used about ½ bag of frozen green peas)
2 tablespoons minced parsley ( I am sure I used more)
¼ cup turnip and parsnip if at hand (I used 1 cup slice parsnips )
½ can tomatoes (or equivalent fresh – I actually used a 15 can of stewed tomatoes)
3 cloves chopped garlic (not in original recipe but I can’t make a soup without it)

Put meat in large kettle and boil for an hour; now add all the other ingredients and cook until soft (about 40 minutes).  Then serve.

Note: I boiled the meat for 1½ hours to make sure it was very tender. Then I added about 1 ½ cup of chicken stock to cover vegetables because the broth had reduced significantly.