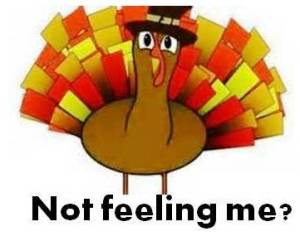 The large, browned to perfection, glistening turkey is a monument that marks this hallowed occasion.

It’s the centerpiece at the table. We circle it like wagons and glaze upon its roasted image with wonder, delight and torrid, tasty desire.  The cook who prepared it must be a saint. Surely no sinner could create something so phenomenally divine.

Ok stop right here. Let me be real for a minute. Sometimes it’s a chore and pure burden to cook the emblematic foul. The expectations that accompany this poundy poultry are heavy – pun absolutely intended.

I’ve set the bar pretty high on the succulent scale and each year I exceed it. You see I am a briner. With the skill and execution of a master mixologist I concoct brines using an array of sweet and savory ingredients.  It’s a lengthy process. I brine my bird in a large, insulated ice crest for 24 hours. When my efforts elicit the “wow factor” after the first bite, my work is done and oftentimes so am I.

I have to admit, there have been a handful of Thanksgivings when I wasn’t feeling the bird after all the painstaking effort I put into making it perfect. Or  when I thought about what an undertaking it was and asked myself  if I really wanted to go through the fuss of it all.

For those of you who are purely spectators at the Thanksgiving table (absent the sweat equity required in making anything) there has undoubtedly been a time or two when you wanted someone to pass the mashed potatoes but you passed on the bird. Why?  You just weren’t “feelin’ it.”

If this happens to be the year that you aren’t feeling the bird or want to provide an alternative for those who aren’t feeling it either,   I offer my lovely and simple Rosy Chicken Recipe. No it doesn’t have roses in it; it is marinated in a mixture that contains lots of fresh rosemary, fresh garlic and lemons. Do yourself a favor and use only an organic chicken for this recipe. It will pay big dividends in terms of flavor.  This bird is sure to entice a turkey fan or two.

So you are probably wondering, am I making a turkey this year or not? I am still on the fence, gazing into the barn yard.  But seriously, whatever you make this Thanksgiving or bring to a Thanksgiving dinner (if you are not cooking) make it a wonderful time and bring lots of love and laughter with you.

Squeeze lemons to obtain about 1/2  cup of juice. Add the juice to a mixing bowl along with olive oil, 1 teaspoon sea salt, ¼ teaspoon cracked pepper and chopped garlic. Whisk ingredients well.  Pour mixture into each plastic zipper sealed bag, evenly distributing the mixture between the bags.

Place each chicken half on a large baking sheet lined with non-stick foil. Place lemon slices and rosemary from marinade on top of chicken, and some underneath chicken. Pour remaining marinade on chicken. Cover loosely with fold. Place in oven heated 375° degrees Fahrenheit and bake 1 hour, basting frequently after the chicken has been roasting 30 minutes. Remove foil after an hour and bake another 30 minutes until golden brown, basting frequently.

Remove from the oven let cool a little before cutting. Place chicken pieces on a serving platter. Garnish with the lovely roasted rosemary and lemon used in baking.

2 thoughts on “Thanksgiving is all about the turkey, but does it have to be?”