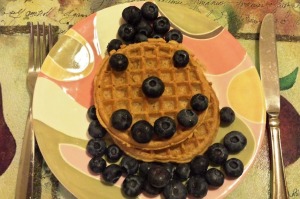 I love waffles and they love me back!

Whether store bought or hot off the griddle, I am in a love affair with waffles and have been since I was a child. I can eat them any time, any place and anywhere.

You see pancakes, though light and fluffy, can’t hold a cup of syrup to waffles, literally. But the little nooks baked into the surface of waffles can cradle the syrup along with butter too. Now that’s what I ‘m talking bout!

Waffles have a storied origin dating back as far as the Stone Ages when early man – or probably early woman – cooked a mixture cereal pulp  on heated stones until they were crispy on both sides.  As man and womankind progressed, so did waffles with the advent of waffle irons – to cook the unleavened cakes – which made their debut in the 13th century.

Oh, enough of all the ancient history. Let’s skip to modern history. In 1953 Eggo frozen toaster waffles hit the stores and landed in the freezers of American household across the nation. They were convenient, tasty and all the rage.  When I tasted  one of those toaster delights drizzled with Log Cabin Syrup as a child, it was love at first bite. Pancakes, smancakes was my immediate  thought.  And the rest is – well history.

Today waffles have come a long way from the Stone Ages and the Eggo days. They range from classic to Belgium to multigrain varieties to mention a few, and are among the new culinary couture as they are now tastefully dressed up in an array of sweet, savory and dessert toppings. And the newfangled waffle irons are as varied and intricate as the stars.  It’s a bold new world for waffles. There are no limits or boundaries.

Waffles nestled in my freezer

Since waffles became popular so much has changed, but one thing has not. Frozen waffles are still a staple in the  freezers of many American households, including mine.

In honor of National Waffle Day (August 24th) and National Waffle Week (celebrated the second week in September) here are two of my favorite waffle recipes. I call them “Waffle Me This” sandwiches. My son loves the breakfast version. I fancy the anytime version. Both versions feature one of my favorite, tasty indulgences – barbeque turkey bacon. It’s a sandwich of waffle proportions! So if you are waffling back and forth on this recipe, stop it already – just  waffle this. You won’t regret it.

Waffle me this sandwich – Breakfast Version

To a skillet heated to medium, add butter. When melted, add tomatoes, bell peppers and onion. Sauté lightly, about 1 minute. Pour in egg mixture and stir, scrapping the eggs from the edge of the pan to the center, forming a soft, mound. Cook until eggs are set.

Place warm waffles on a plate. Layer one waffle with American cheese, then top it with the barbeque turkey bacon and  cooked egg scramble. Place the other waffle on top to complete your sandwich.

Bonus:  to turn up the flavor –  in a bowl you can whisk a little Dijon mustard and maple syrup together and use it as a drizzle it over the eggs before you place the second waffle on top.

Waffle me this – Anytime Version 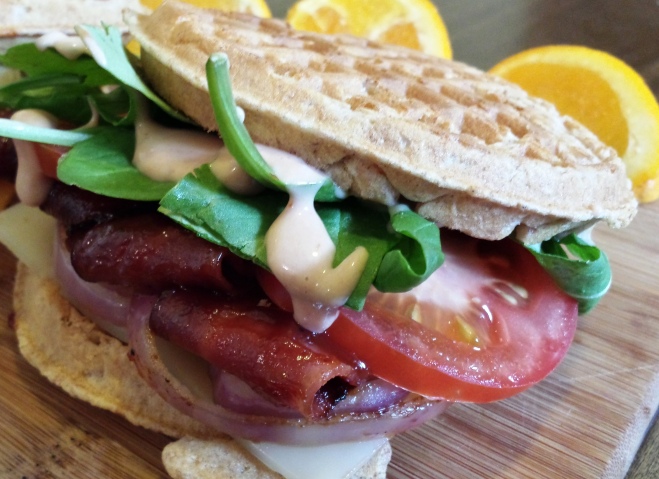 Place warm waffles on a plate. Layer one waffle with Swiss cheese,  they top with grilled onions, barbeque turkey bacon and generously top with fresh arugula. Place the other waffle on top to complete your sandwich.

Bonus:  for an extra kick-  in a bowl you can stir a little ranch dressing and hot sauce together and drizzle over the arugula before you place the second waffle on top.

How to make Barbeque Turkey Bacon

2 thoughts on “Waffle me this”

Home of Red Velvet Gourmet Spice Rub and Seasoning - its sassy and savory and makes any recipe sizzle!